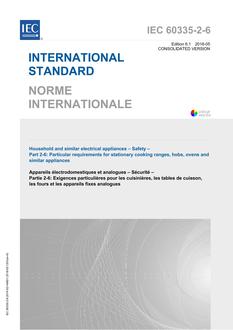 IMPORTANT INFORMATION REGARDING YOUR ORDER:

Your PDF Items will be delivered via email within two hours of order processing.
PDF items may not be returned.

IEC 60335-2-6:2014+A1:2018 deals with the safety of stationary electric cooking ranges, hobs, ovens and similar appliances for household use, their rated voltage being not more than 250 V for single-phase appliances connected between one phase and neutral, and 480 V for other appliances. This International Standard also includes some requirements for ovens that are intended to be used on board ships. Examples of appliances that are within the scope of this standard are:
– griddles;
– grills;
– induction hobs;
– induction wok elements;
– pyrolytic self-cleaning ovens and steam ovens. As far as is practicable, this standard deals with the common hazards presented by appliances that are encountered by all persons in and around the home. However, in general, it does not take into account; persons (including children) whose physical, sensory or mental capabilities; or lack of experience and knowledge prevents them from using the appliance safely without supervision or instruction. It also does not take into account children playing with the appliance. This sixth edition cancels and replaces the fifth edition published in 2002 including its Amendment 1 (2004) and its Amendment 2 (2008). It constitutes a technical revision. The principal changes in this edition as compared with the fifth edition of IEC 60335-2-6 are as follows (minor changes are not listed):
– introduction of requirements for steam ovens;
– introduction of requirements for ovens intended for use on ships;
– clarified requirements for oven shelve construction and test;
– introduction of optional values for the accessible surface temperatures of ovens;
– introduction of stabilising means including warnings;
– clarified representative periods for various appliances (Clause 10);
– introduction of a spillage test for built-in under-bench ovens. It was established on the basis of the fifth edition (2010) of that standard. This publication is to be read in conjunction with IEC 60335-1:2010. This consolidated version consists of the sixth edition (2014) and its amendment 1 (2018). Therefore, no need to order amendment in addition to this publication.